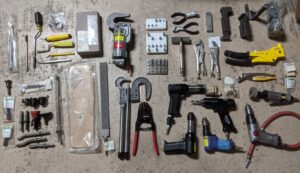 I originally purchased only the tools to do the practice kit. But since I’ve decided to build, there are many more tools needed. Van’s has a list of tools needed for the practice kits and for building here.
I found someone on VansAirforce.net (VAF) selling a set of tools they had purchased, most of which were from the Isham tool kit. They were asking $1000 for the set, which I thought was very reasonable! I tried to calculate the actual value of the tools based on what I had seen them sell on VAF, my guess was around $1500. The Isham tool set new is about $2000. Here’s the pictures he had post of the tools. 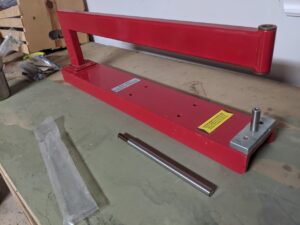 His profile said they were in Kansas, only a 5 hour drive. After communicating with the seller I found out he had moved to California. I estimated shipping would be around $100, so I offered $1100 if he paid shipping. By this time, a few people had replied to his thread expressing their interest in purchasing.
Thankfully he accepted my offer! With a purchase of this amount, I wanted to use PayPal for their buyer protection service. I ended up sending him $1150.

Since I still want to maintain an accurate list of tools and money I’ve spent, I’ve listed the tools individually with their estimated used price. Many of the tools were new in package or unused, for these I’m using what the value would be to sell rather than the retail value since I didn’t buy from a store. If I could find the retail price, I’ve added to the name.

This top item, “adjustment”, that is used to correct the total estimated value with what I actually spent.